I just wrote about beacons and we have Eddystone now. As Google announced, Eddystone is their approach to beacons and some people claim that this is really a game changer. I don’t agree. In my opinion it’s only evolution and natural step for Google who had to catch up with Apple iBeacons so far. I see also some serious issues that make Eddystone not the game changer.

My first doubt is that new features won’t be supported on Apple iPhones. It’s unlikely that Apple will decide to support 3rd party solution especially since they have their own iBeacons. What is more probable is that iBeacons’ specification will be expanded to meet new features but it won’t be compatible with Eddystone. So, Eddyston’s special features will work only on Android.

A second question is about a broadcasting URLs feature. Eddystone can broadcast an URL address and this features is claimed as a killer feature. This function will work even if you have no a beacon application installed on Android smartphone. In such situation Android will display a notification and will let you open the broadcasted address in a web browser. However could you imagine what happens if there is a lot of beacons broadcasting URL addresses and user will be flooded with notifications? I guess the user’s first reaction will be turning this feature off.

Another concern is related to a battery. As Eddystone can advertise three different packets we can assume that the device will consume more energy and it can affect battery life. Particularly if a beacon device would be dual-compatible – I mean it acts as Eddystone and iBeacon simultaneously. Instead of lasting for whole year we can get a beacon that works for a few months, however it strongly depends on a hardware and battery type.

I’m very curious how Google beacon will be adopted by developers. 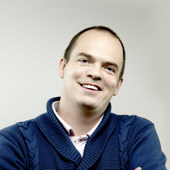 Privately dad and husband, who loves good books and to invent new ideas. Runs a lot through meadows and hills arround his home. Believes that simplicity is beautiful and less is more!